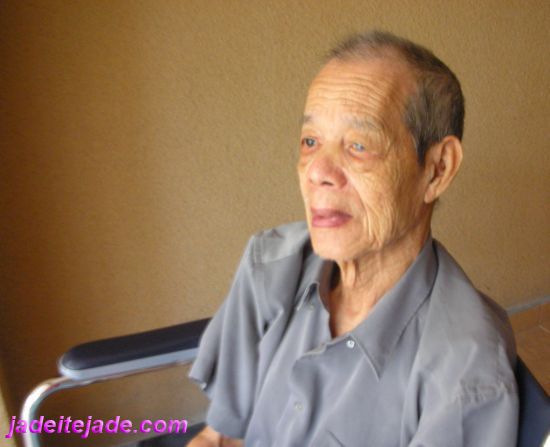 My aged parents have been living with my sister these last few years.  When my father had a stroke, his ambulatory movement is much restricted.  I do not have a living room in my own house and it will be difficult to ‘haul’ him up and down the 14 steps.

Last year the contract on my sister’s domestic maid expired and she would be going back to her home country soon.  The maid takes care of my father all this while when he is confined to a wheelchair, bathes him, helps him sit up on the commode to do his bowel business, gives him breakfast and puts rice and vegetables on a plate for his lunch and dinner.  I will also nursemaid him as much as I can and I will visit them almost every day.

My sister has already engaged a new maid.  But it will be difficult for the maid to nursemaid my father, when she is new to her job and the maid will have enough on her plate with the various domestic chores and cooking for the household members.  So from then on, I bathe him, watch his daily bowel movement, shave him, dress him up, take him out to have some sunshine and so on.

And my father especially likes it when I bathe him.  He always makes some small complaints that the maid was too rough and she will do it her way.  He never demands that I bathe for him but from his conversations I guess that he loves me to bathe him.

It is actually an easy job to bathe my father.  His mental faculty is still strong though his memory is getting weaker and weaker.  He can tell me the stories of his life during his younger days in China and Nanyang but he can forget what he eats for breakfast or lunch.   Thus, I always engage him and tell him that I am going to write some great novel of China, so he must give me some background history of China and the coming of the communists to his village.  This is maybe one of the ways to ensure that he just does not go off to the deep end of senility.

I usually bathe him in the morning as I have to go to work.  Pushing the commode into the bathroom, I undress him, switch on the water heater and test the temperature of the water.  My father will then quietly enjoy a lovely warm bath.  He is as obedient as any 3 year old child, oh such a pathetic figure with his rubbery and wrinkled skin covering his thin sinewy bones.

First I shower and scrub him on his head which still bears some thinning grayish hair.  Using the Johnson & Johnson liquid soap I rub it all over his chest and back.

“Now scrub your body and arm pit” as I moved the shower spray over his body.

Then he will ask me to use the shower on his thighs as he says it is very itchy.  He just enjoys the sensation of the warm water jet onto his skin.

So I just sprayed the warm water stream on the body spots he commands.

As I squeeze some liquid soap onto his palm, I said, “Now wash your dick.”

He obediently does it as his hand is still agile and has a firm grip.

Then I will use the warm water jet stream all over his body until he has enough.

Inside the bathroom I will apply some lotion cream onto his body and back and put on a fresh set of clothing for him before pushing his commode to his room.

After the morning bath, father is as fresh as morning dew.